Due to the Corona Virus, unemployment has been at an all time high. With the fear of the virus, businesses have shut down and many people have lost their jobs. Dawn Silva, manager at York Employment stated, ” In all my 20 years of staffing, the last month have been the hardest to recruit new workers.” Even though businesses are starting to reopen, people are still afraid to go back to work. With the stimulus bill, it’s caused many people to stay home. Why is their such an issue to find people when unemployment is at an all time high? Well, with the fear of the virus, and the money the government has been sending unemployed workers, their has been a decline in people searching for jobs. 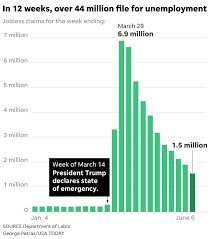 In this graph by USA Today, it shows how many people have filed for unemployment in the past couple of months since the Corona Virus was declared a national emergency. With so many people unemployed, the government released the stimulus bill that gave unemployed Americans $600 dollars a week. Since the stimulus bill has ended, you’d expect more people to be searching for jobs. But, the exact opposite seems to be occurring. At York Employment recruiting new candidates has proven to be of the highest level of difficulty. This has caused York Employment to be more innovative and creative with our recruiting efforts then ever before. Such as, increasing our recruiting budget on all recruiting platforms and social media. We have also added additional staff both remote and in office to increase our efforts. Through these hard times, we have been able to adapt to what is happening and find new innovative ways to manage our business. We are looking towards the future!